I’m not sure for how long you have to be a writer in order to sensibly take a break from writing. I’m pretty sure it’s longer than I’ve had this blog, but take a break I did for most of the summer. I was still writing in other places like Richardson Living Magazine and Grown and Flown, but for the most part, I did not keep much of a writing routine.

There were many reasons — my twins starting daycare, traveling, the Olympics — and these all impacted my “Weekend Reads and Listens” because I wasn’t doing too much of either. But below are a few selections that have either stood out for me this summer or I am looking forward to diving into this fall. 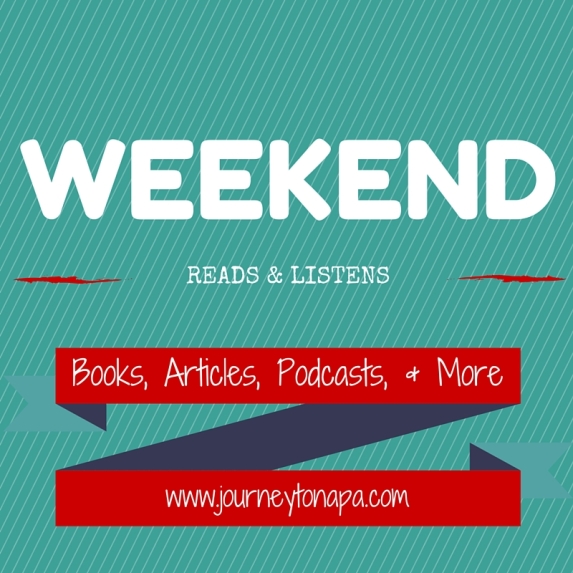 I’ve written before how, since returning to my university from maternity leave two years ago, I re-evaluate my decision to work every semester. School starts tomorrow and I’ll be at my desk so another deliberation period has come and gone. But one thing about not working that attracts me is that roles in my household would be clear — my husband makes the money, I manage the kids and house. There would be overlap, of course, but it all seems very efficient and I like efficient. But this is also the very factor that scares the hell out of me when I think about leaving the workforce. That is why I loved this article from Ann Cinzar about the division of roles on Motherwell so much. It’s help change the way I think about this issue.

Since I am still doing this working thing, I’m looking forward to reading The Pie Life by Samantha Ettus when it comes out next month. It was recommended on one of my favorite podcasts, #AmWriting, and addresses the ever-elusive work/life balance quest. This is hardly a new topic, but from the reviews it appears to tackle it in a unique way.

Tonight is the Closing Ceremony for the 2016 Rio Olympics. It never seems to elicit the same kind of excitement as the Opening Ceremony and I probably will just have it on as background noise. But I did re-read a post on my former blog re-capping the 2012 London summer games. I could have pretty much just changed the city and posted it here as I guess the way I approach the Olympics hasn’t changed much in four years (and Usain Bolt and Allyson Felix are still amazing). The one change I would obviously make? The part where I go on and on about how inspiring (and hot) Oscar Pistorius was. That made me cringe.

I spent most of the summer in the midst of a deep dive into Hamilton. Like, so deep even while writing this post I had to take a break to watch the cast’s performance from the Grammy’s which I have seen 452 times.

Like most Hamilton fans who aren’t the POTUS or Beyonce, I haven’t actually seen the musical. But every day I memorize a little more of the soundtrack, which is why I have no new podcasts to recommend. I am too busy rapping about the American Revolutionary War in my car. It’s actually quite motivating for a writer, seeing as Alexander Hamilton was, at his core, a prolific writer. Here’s an excerpt from the Act I finale number:

Do yourself a favor and join the bandwagon already. In about five years you will be able to afford to see it in person.

I actually do have one podcast to recommend. After reading this article about trading the dreaded-yet-impossible-to-get-out-of-your-head children’s music for audio books in your car with our kids, I checked out one of the podcasts recommended. The Stories Podcast is, just as it sounds, a podcast where they read stories (many of them original) and it’s perfect for my two-year-olds. I’m not sure they are really following the plot, but they like the different voices. I’m certain this break is short-lived, but I’m enjoying it while it lasts.

Let me know if you have any great recommendations for the fall!