As I packed an overnight bag on Friday for my trip to Austin — a short trip both in the time it takes to get there from Dallas (three hours) and how long I was staying (24 hours) — I was trying to explain to my 2.5-year-old twin boys why I was going.

“Mommy is going to march in Austin,” I said.

“Are you going to do jumping jacks too?” Ben asked.

While the boys were satisfied with this explanation and had moved on to fighting over a dump truck, I didn’t think it was right to leave it there. They needed to know why mommy was marching. But how do I describe my need to stand in solidarity with thousands of other women (and men) as we make our voices heard during a time when so much of our progress in terms of our bodies, our work, our healthcare, our overall place in society is being threatened by policy and posturing? I couldn’t. So I told them the one reason I thought they could grasp:

“Boys, Mommy is marching because we love everyone.”

And off to Austin I went. 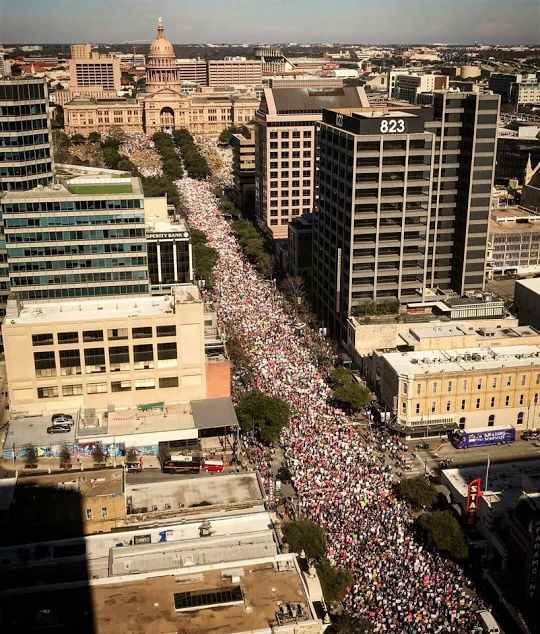 As demonstrations around the world took place from D.C. to Los Angeles to Amsterdam to Ghana, the sister march in Austin brought out more than 40,000 activists and advocates to the Texas Capitol to peacefully march on an 80-degree day in late January. While the marches are in response to the new federal administration, it is fitting the Austin rally originated on the grounds of the state Capitol. Many of the signs and sentiments are just as applicable toward our state government (from the “Bathroom Bill” to the abhorrent law requiring health care facilities to cremate or bury aborted fetuses). Hopefully the papier-mache uterus I saw floating above the crowds at the march was “accidentally” left behind at the Capitol.

That said, I’m trying hard to avoid using the word “protest” here. I know these marches are labeled as anti-Trump protests in the press, but this is not the feeling that permeated through the demonstration on Saturday afternoon, at least not in Austin, at least not from my vantage point. Starting from our bus ride to downtown full of fellow participants, the vibe was positive and supportive — empowering, not angry.

I don’t believe these marches were about protesting the new administration’s existence. There is a reason these rallies happened the day after inauguration: It was to demonstrate to Trump that yes, we accept you are the president. But we will not accept your rhetoric that (further) marginalizes women, people of color, LGBTQ, immigrants, entire religions and more. We will not accept the messages you have sent by some of your Cabinet selections. We will not accept what you tweet to us. And the march was to show — on his first full day of his presidency — he will have millions of women and those who support women ready to fight his actions that seek to make good on his most misogynistic and discriminatory campaign promises.

So how are we actually going to do that? Look, I am not a natural activist. I have strong opinions, but I have never attended a march or protest before this. I concede that there are many times where I could have and should have used my voice to speak against injustice and inequality and I didn’t. I can’t change the past, but I can resolve to do better. The Women’s March organizers have launched a site with 10 Actions for the First 100 Days. For those interested, I think it’s a great place to start.

I don’t plan to start going door-to-door or making cold calls. These are important and effective strategies in political activism, but they are not for me. My goals are to identify the issues that I am most scared for under this administration and find local organizations who have been fighting for these causes long before Nov. 8, 2016, and get involved with them. 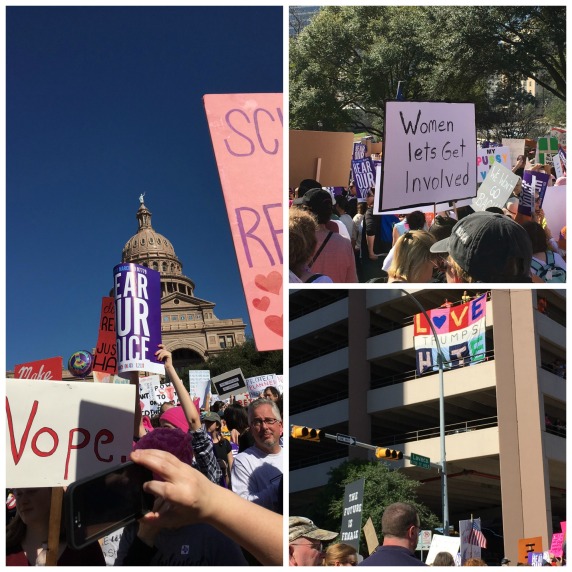 Participating in this march did not make me want to stage sit-ins every weekend or quit my job to become a community organizer (though more power to those who do). I wanted this march to energize me, to instill in me the momentum I know that I — and all of us who care about these issues — will need for the next four years. It showed me that there is so much support across ages and genders for women’s issues and others. And the under-representation of people of color reminded me why intersectional feminism is so vital and how much work there is to do even within the “movement.” It was actually quite a self-serving endeavor.

I think it did the trick. I think I am ready.

My sons woke up at 5:30 a.m. Sunday morning after the march. I was tired from the day and the drive back on Saturday night, but I convinced myself they were just excited to see me — despite the repeated calls for “Daddy” — and headed to their room. The endorphins were still pumping from the march and I wanted to share it with them.

I asked the boys if they remembered why I went to Austin. “To march,” they said. And I reminded them why I had to march, because we love everyone. They nodded but then Ryan quickly added, with a smile, “No, I bite everyone.” I ignored the comment because he loves nothing more than my aghast reaction and it was a bit too early for a lecture on kindness.

But I know that my most important call to action, my most influential “next step” is to raise boys who turn into men who — should it be necessary — tie up their pink laces and march alongside the women in their lives because they know that “women’s rights are human rights!”