It’s a week into the new year and you are probably tired of reading blogs about the new year. Roger that.

But if you will indulge me, for this “Weekend Reads and Listens” post, I am focusing on a few picks that are on my radar to consume in the year ahead that I hope might pique your interest as well. 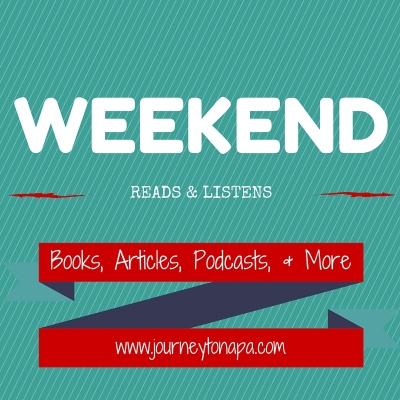 2015 was not a banner year for me in terms of books. I didn’t read that often and when I did, I was mainly caught in this “If you liked Gone Girl, you will love this book” cycle. This is particularly disappointing because I didn’t even like Gone Girl all that much. But I am sucker for any description that claims a “shocking twist!”

So for at least the first part of the year, my reading for 2016 is based mainly on the best reviewed books of 2015. I’ve poured through a plethora of these lists (time I could have spent actually reading a book I realize), and I’ve bookmarked a few — Amazon of course and a couple of blogs I follow — to refer to throughout the year:

A few books that are on my short list:

I think these represent a good mix of personal development and fiction. When I read one genre, I am usually craving the other, so balance is key.

I’m currently bored if I don’t have a podcast streaming in my car, even though my work “commute” is only 10 minutes so I barely have time to get past the sponsor announcements.

Right now I am focusing on the second season of Serial. We are four episodes in, and, contrast to some other reviews, I am enjoying it. It’s nothing like the first season which had a true crime focus, and Sarah Koenig said herself in interviews before this season launched that they will likely lose some of last year’s fans.

Season 2 tells the story of Bowe Bergdahl, the U.S. Army soldier who was captured and held hostage by the Taliban for five years in Afghanistan. I am learning so much about the U.S. military and our war in Afghanistan, something that I shamefully shouldn’t need a podcast to get me interested in, but so be it.

This season doesn’t inspire me to spend hours online going down rabbit holes of theories and evidence, but I don’t have time for that anyway. It is much more straightforward than the initial season, but still great storytelling with a fascinating “character” at its core, which is the whole point of the podcast. And I can listen to Koenig say anything.

To get my true crime fix (remember, I love a great twist!), I am going to get on the Making a Murderer bandwagon. I’m not sure I even completely understand what this Netflix series is about and I’m too scared to Google it because of spoilers, but I just know everyone says it’s addicting.

Finally, in the very short-term, I am eagerly awaiting the Golden Globes this Sunday night. Before there were podcasts and Netflix, I was just a girl on the couch reading Us Weekly from cover to cover. Though I am too out-of-the-loop to know much about any of the movies or shows nominated, bring on the celebrity gazing!

I think all of these things should keep me occupied for a while. What are you planning to dive into this new year?